PEMF reduced pain intensity and sensation scores in a small trial of patients with diabetic neuropathy. 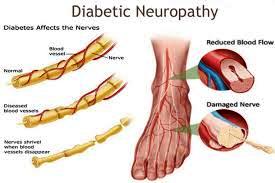 ​The incidence of type 2 diabetes has increased strikingly in the last several decades. Accompanying this development has been an increase in the incidence of diabetic neuropathy, leading to progressive pain, loss of sensation (primarily in the feet), weakness, and disability. Conventional therapy has consisted largely of attempts to control the diabetes and to moderate the pain.

PEMF can be thought of as a whole-body (100 trillion cells) battery recharger. According to Bryant A. Meyers, author of PEMF – The Fifth Element of Health, PEMF works by “improving adenosine triphosphate [ATP] production, increasing oxygenation, enhancing circulation, promoting hydration, facilitating detoxification,” and gaining a better overall absorption of nutrients.1
​How it Works
PEMF uses healthy electromagnetic frequencies, as opposed to cell phone frequencies, to enhance overall health and wellness. Every cell in the body has a negative charge on the cell wall. For nerve cells, this is approximately -60 mV; other cells may vary in the net negative charge. To maintain healthy levels of this negative charge, potassium and magnesium should be contained inside the cells, while calcium and sodium ideally remain outside the cells.

Obviously, there are scores of fundamentals—vitamins, minerals, hormones—that must be maintained at an optimal level for cell health. The pH of the blood, normally 7.4, is, of course, essential, as are significant excesses or deficiencies of nutrients; and numerous toxins must also be kept at bay. While all these factors play an important role in cell health, the electrical health of cells is one of the most critical of all the vital elements.

Starting in the 1960’s, the author (CNS) introduced the concept of stimulating parts of the body—brain, nerve, spinal cord, or skin—to control pain.2 The most widely used of these techniques is Transcutaneous Electrical Nerve Stimulation (TENS) or electroacupuncture. For TENS, frequencies of 1 to 100 Hz are used. For cranial stimulation, up to 15,000 Hz is optimal. The Liss CES, now sold as the Fisher-Wallace, emits 15,000 Hz, 500 Hz, and 15 Hz. The Alpha-Stim puts out up to 12,000 Hz.

In 1994 Dr. Shealy began working with human DNA frequencies when he studied Microwave Resonance Frequency in the Ukraine. Physicians there had discovered that DNA resonates at 52 to 78 GHz at one billionth of a watt per cm square. They had used these frequencies and intensities to treat over 250,000 patients. Such frequencies are produced with a Tesla coil at very high voltage through a spark gap.

The first reported use of such frequencies in the US was for restoration of dehydroepiandrosterone (DHEA) in patients with diabetic neuropathy.3 Since then, the author has applied these frequencies to specific acupuncture circuits to raise DHEA, oxytocin, neurotensin, and calcitonin or to normalize aldosterone and lower free radical production. In addition, Dr. Shealy reported significant telomere regeneration of 3% to 4% annually using total body PEMF at the Giga frequencies.4

These frequencies are significantly more powerful than the low frequencies used by TENS, but are used only from 30 to 60 minutes daily. In addition to stronger activation of acupuncture points, such daily use has been demonstrated to assist in rejuvenating telomeres, the tips of our DNA that ordinarily, even with good health habits, shrink 1% every year. Giga frequencies should be used only a maximum of 1 hour per day and are contraindicated when there is any implanted electronic device, such as pacemaker, or during pregnancy.

PEMF primarily uses frequencies in the range of 1 to 100 Hz at very low intensities of microTesla. Permanent magnets usually range up to 4.5 Tesla.

1 tesla is equivalent to:

PEMF significantly increases circulation and has a wide variety of health benefits. Therapy may last 30 minutes to several hours a day, and may be directed at specific areas or to the entire body. As noted, the only contraindications are pregnancy and individuals with an implanted pacemaker or electrical device.

Benefits for Diabetic Neuropathy
Neuropathic pain, and specifically peripheral neuropathy, arises from ectopic firing of unmyelinated C-fibers with accumulation of sodium and calcium channels.5 Because PEMF safely induces low frequency currents that can depolarize, repolarize, and hyperpolarize neurons, it has been hypothesized that directing this energy into the sole of one foot could potentially modulate neuropathic pain.

In 2003, Musaev et al conducted a study involving 121 patients with diabetic polyneuropathy (DPN) before and after courses of treatment with PEMF with complex modulation (PEMF-CM) at different frequencies (10-100 Hz).6

The authors discovered that the “earliest and most significant electroneuromyographic signs of DPN were decreases in the amplitude of the H reflex and the Hmax/Mmax ratio in the muscles of the lower leg.” After treatment with PEMF-CM, the authors reported “regression of the main clinical symptoms of DPN, improvement in the conductive function of peripheral nerves, improvement in the state of afferent neurons, and improvement in the reflex excitability of functionally diverse motor neurons in the spinal cord.” The researchers concluded that PEMF-CM at 10 Hz had therapeutic efficacy, especially in the initial stages of DPN and in patients who have had diabetes mellitus for up to 10 years.6

In 2004, Weintraum and Cole conducted a pilot study to find out whether 9 consecutive 1-hour treatments in a physician’s office (excluding weekends) of PEMF can reduce neuropathic pain scores in refractory feet in people with peripheral neuropathy.5 The study included 24 patients with refractory and sympathetic polyneuropathy of various etiologies, including diabetes. Only the most painful foot received the 9 hours of treatment, and pain was measured by visual analog scale (VAS) before, immediately after, and 30 days following therapy.